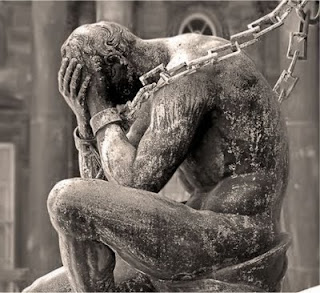 True, the online scene - especially www.fetlife.com - is fantastic for finding out about yourself, and for toy reviews and safety. However, it's very easy to be drawn in by the huge sense of subbish entitlement; "Wah wah why doesn't my wife want to beat me?" "Wah wah why won't my girlfriend dress in latex and spend 12 hours teasing and denying me?"

There's a horrid tendency for subs to form a secret online conspiracy egging each other on to manipulate and coerce their partners into becoming what they are not, and into changing the rules of well established grown up relationships.

If, for "dominate me" you substitute "dress like a hooker and give me lots of blow jobs", these discussions are suddenly revealed for what they are; focused on objectifying and exploiting the vanilla partners - ironic really, since the posters claim to yearn for Female Supremacy!

To make matters worse, everybody who isn't whining, is having  more fun than you. You're missing out! Hurry or kink life will pass you by! This,of course, is an illusion caused by nobody blogging or posting about the non-kinky, mundane parts of their lives.


So, yes, explore the online Fetish "Community" and learn from it. But, no, don't catch that unattractive sense of entitlement or become disgruntled that the totality of your life doesn't measure up to the edited highlights of others.

Beyond that, don't try to badger your partner into exploring the Fetish Community, online or off.

Imagine you were trying to get her into - say - cycling. There's a lot cycling has to offer her; adventure, exercise, the possibility of visiting new and interesting places. A sensible approach would be to borrow a bike that fits her and get her to come for  a ride. It would be utterly bonkers to drag her along to a bicycle club where everybody discussed sprockets and inner tubes, or to leave a copy of What Bike? magazine around and expect her to read it! The objective is to enjoy cycle rides with her, not get her to embrace cycling culture.

Email ThisBlogThis!Share to TwitterShare to FacebookShare to Pinterest
Labels: Getting your wife or girlfriend to dominate you, Mistakes subs make with Vanilla partners