Morally, domming feels wrong. Nice people don't exploit, tease, humiliate or hurt their lovers, or anybody else. It takes a while to come to terms with being a little bit evil, and then to feel safe in admitting that to a partner. Perhaps she feels guilty because your kink doesn't turn her on, but all the things it provides does.


She may also want to control the descent into kink. Becoming openly enthusiastic might trigger more demands from you that she'll enjoy less. What else do you have lurking in the toy box?


Finally... well... there's the possibility that she enjoys you in a chastity belt more than without, and doesn't want to tell you this in case it hurts your feelings.

Male slaves! Be better than a hot bath and an episode of the Good Wife

If she's basically vanilla, probably not.

So don't try to compete with it. Instead, make your slave available on evenings when she's up for relaxing and pampering, but not really interested in penetrative sex.


Be better than a hot bath and an episode of the Good Wife.

Submission is like love... probably is a kind of love, so it has two modes:

This is the place for a lot of traditional  "scenes" and certain kinds of "play" as limits stretch and the tested sub goes deeper into their submission. It's also about those moments of passion when you fall at her feet and... well... submit.

Imagine the toyboy of a Roman domina; he doesn't have time for expressions of undying submission, nor is his owner likely to go in for theatrical tests of his submission, because his submission is a simple fact.

Humans just don't do boundless passion on demand! And, if the process of submission is powerful enough, then it can only lead to the state, for a while at least.

Moreover, some couples can't really achieve submission-the-process. Perhaps she's too self-conscious, or not forceful enough to dominate him. Perhaps he's so deeply submissive, there battle's over before it begins. In this case, submission-the-state is the only kind that's available.

The good news is, both kinds of submission are deep, real, valid. I suspect it's best to revel in what you have at any one time, rather than to try to force things.

Evolutionary Psychology and male chastity - what's in it for her?

(I've been reading some Evolutionary Psychology recently. It's all about how much of what we do has Darwinian roots, even when we don't realise it! ) 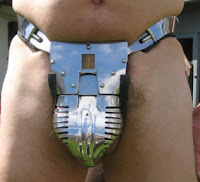 So you're locked into your chastity belt and the key is in the post, or in the self bondage time safe.
Sex is off the menu.

In evolutionary psychology terms, what's in it for her?


"Soft" male chastity and denial, in which you earn sex, makes perfect evolutionary sense; she's asserting status by testing, you're proving himself worthy.

However, "Hard" male chastity and denial, in which you do not get sex (or even get to come),  seems odd because it doesn't lead to the theoretical possibility of reproduction.

How could natural selection give us traits that steer us away from sex?

It actually makes better sense from her point of view than from his...

Hard chastity and denial from her perspective


Obviously, if her ability to test implies her status, then an impossible test implies infinite status. Hard chastity puts her on a pedestal.

However, I think something darker is also going on.

"Bait and Switch" - benefiting through the false promise of sex - seems to be a hardwired in human females (and in other species). Ancestral women evolved the strategy of accepting the benefits of courtship but avoiding the sex, since it could lead to being pregnant by the wrong male. The instinct is still with us, so perhaps some women get a satisfaction in knowing they've already won the exchange.

This leads to the awkward question; why is the husband or boyfriend the wrong male?

Why the husband or boyfriend is the wrong male

I think three things are going on here:

Any male would be the wrong one

In ancestral times, there would be many periods in which it would be bad to be pregnant. No wonder then, that modern women's sex drive fluctuates wildly depending on stress, number and age of children, health, living circumstances, colour of the wallpaper...

Intimacy works against the perception of high status

Oh sure, you impressed the hell out of her during courtship, but intimacy works against the illusion of you being an Alpha Caveman. She knows all the problems you have at work, all your fears and worries, she's nursed you when you're ill. You've probably cried on her at least once.

This is what a good marriage is about. However, you're just not her He-Man anymore.

The further you get into a marriage, the more flaky the passion  - the animal-level desire becomes. It doesn't mean you don't fancy each other or have fun in bed, but the spark comes and goes and requires nurturing.

How hard chastity gets around the wrong male problem

So, sex is off the menu, but you're still her devoted lover. We've already seen that you've put her on a flattering pedestal  and that she may gain satisfaction from knowing she's winning this exchange.

If you are the "wrong male" at the moment, if her instincts don't drive her to have sex with you, then the same instincts may nudge her away from intimate activities that risk sex.

However, putting your penis out of the way changes everything.

For example, she can enjoy a long massage without the prospect of you wanting to mount her oiled but relaxed body and fill her up with semen! 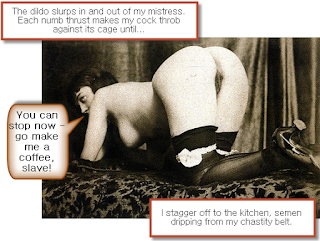 Better still, your giving her an orgasm no longer has anything to do with sex; it's just another form of pampering.