How to turn your wife or girlfriend into a sadist... 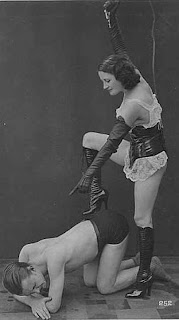 Well, you can't. And if you could - if you could press a mind modification button to make it happen - you shouldn't.

The neat thing is that the aversion wears out, leaving us with an increasingly intense buzz. This is why some things are an acquired taste. Chili, for example, or bungee jumping.

Why the - call it - rebound buzz? Perhaps the aversion module temporally burns out, so the buzz is there by contrast, like when you hit the shower after a run. Perhaps it's some Darwinian thing - the buzz is a reward for persisting in something you don't enjoy.

It doesn't really matter. The point is that the rebound buzz happens at the animal level, is visceral and automatic.

So if your partner whips, first beats to spanks you, then at first she may feel a very human aversion to causing pain, but when she stops doing it, she gets a rebound buzz. After a while, the rebound buzz becomes more intense and the aversion fades away.

Congratulations, your wife or girlfriend now enjoys hurting you. That makes her a sadist.

If you do this - only introduce activities that offer her something - then the whip or hairbrush usually first appear as a means to an end of her liking: "Here's a whip. Feel free to use it to direct me as I make love to you/do the chores."

Steven Pinker calls this "Instrumental Violence", violence done as a way of getting something. It's something humans cheerfully use whenever they feel morally OK about it, not just in the dim distant past, or in 3rd-world hellholes and 1st-world crime zones, but also on the civilised sports field. This makes it the easy one to get her to do, especially if it demonstrably produces results she enjoys ("Lick faster!" THWACK!!!)

Now the taboo's broken, the way opens for two more delicious kinds of violence: "Dominance Violence", in which she strikes you to show she's in charge; and  "Revenge Violence", which extends this into retaliation for slights - in other words, if she's cross, she hits you.

If Steven Pinker's theories are right, it should be round about now that she also starts to enjoy beating you for it's own sake. You'd better have a good firewall in place...
Posted by Giles English at 12:22:00 No comments:

HOW TO BE BAD

Mistakes Subs Make: Not following through 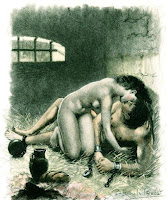 I've done this myself more times than I am comfortable confessing to.

The nice thing about the Internet is that I now know I am not alone. Blogs and fetish forums are sprinkled with similar stories.


Sub to vanilla partner: "I've got this fantasy etc etc."

Vanilla partner: "Odd. But not entirely off putting."

Sub to vanilla partner: "Would you like to try it some day?"

Vanilla partner: "Sure. (Changes the subject.)"

The sub thinks, Phew. That went well. Thank god that's done. And then they wait for their fantasies to come true.

Of course, nothing happens. Vanilla sex and live continues as before.

Now the sub is stuck. The sexuality he (or she craves) is one in which the partner has the control. Being demanding doesn't seem to fit. Plus there's the dread of topping from the bottom. Sub thinks back to the conversation. His partner seemed a little offhand about the whole thing.

Vanilla partner: Sure. (Changes the subject.)


And repeat, until she's bored or irritated.

It's sad really because the first response was so positive: affectionate engagement  in his fantasy followed by unfussed agreement to experiment. She wasn't actually offhand, it's just that it's No Big Thing to her; just a kinky bedroom game, not an all consuming mental world.


"Fancy trying Thai food?"
"Sure."
Later.
"Let's eat out tonight. There's this Thai place that's supposed to be good. Shall I book it?"

Now, perhaps over time she'll grow to enjoy Thai cuisine so much that she'll be the one to suggest visits. For now, however, it's his idea, he has the expertise, it's up to him to set the thing up!


So, here's how to do it with at least a reasonable chance of success:
Of course, there's a lot that can go wrong. You can even damage your relationship. It's up to you to use good common sense, and your everyday relationship skills.