The problem with Vanilla Subs 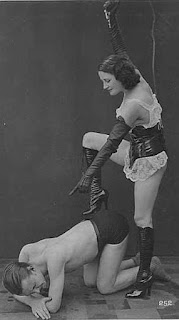 A dominant mate of mine was told by his vanilla ex - "Thank god I don't have to do any of that nasty stuff again."

Privately, he reckoned this was rubbish. “Orgasms don’t lie,” he said.

As a sub myself, I think it’s more complicated.

Even though it’s consensual, D&S simulates evil and feels real to the primitive parts of the brain. (Yes, I know there’s also fluffy stuff in there about trust and intimacy.)

This simulated evil is at least half the fun. However, it creates problems with vanilla people who haven’t had the years to work it through.

Bad for a vanilla dom to whom it simply *feels* morally wrong. Worse for the vanilla sub.

The vanilla sub experiences the simulated evil direct and unmediated… the violation of will and body, the humbling and humiliation, the forced intimacy…

…and they get off on it.

This is a supremely dark place to be and one that challenges a person’s very identity, especially if they’ve had to fight for self determination in this big mean world of ours.

I think the best approach is to be very careful how you “frame” the D/S part of your relationship.

Are you all D/S is darkly romantic, authentic, significant?

Most of all, in the immediate aftermath of your sessions, get back to normal as quick as possible!
Posted by Giles English at 11:21:00