Bonobo communities are peace-loving and egalitarian. Bonobos are considered to have a matriarchal society, meaning that females have a higher social status than males and social interactions are female-centered and female-dominated. Females have strong social bonds amongst themselves, but they do not exclude males.

Only, alas, for most of history, most humans have not been like Bonobos. Men have mostly been nasty, war-mongering, status-obsessed, woman-beating, gay-bashing patriarchal pigs, and the woman have survived and accommodated that.

And yet, it really does feel hardwired.

We already know that Neanderthal genes can affect not just our physical health, but also our propensity for nicotine addiction. Why not also our sexual orientation?

There's an old theory that Neanderthals were among other things matriarchal and that their culture has left an echo in our folklore. 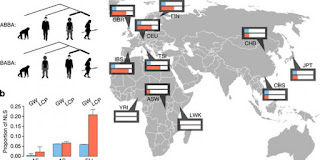 Speaking of which, do you have Neanderthal genes? Allegedly, you can find out by looking at your feet. Is your second toe the same size or larger than your big toe?

Or, a better definition: