China, it seems, is awash with male chastity devices. There are lots of suppliers, but only a handful of actual device types, many of which - intriguingly - have model numbers.

I've been looking at metal chastity devices from China!


For example, here's the A080:
Intriguingly, one supplier describes it as "short for Asian penis". Have Chinese men discovered the chastity fetish? Or is this something rent boys where in the Far East?

Then there's the A081:
This fits more standard sized dicks. For the well endowed there's the M500... 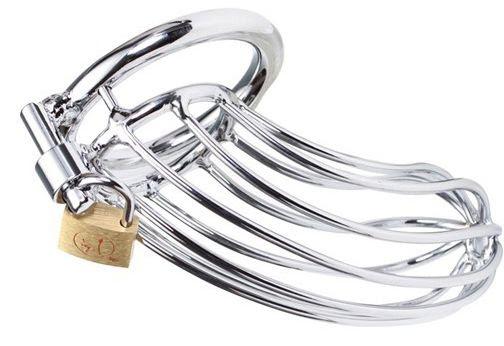 You'll notice that it has a system for connecting the cage to the ring. "science.in.a.cage" has a nice review of the M500  male chastity device (he calls it the "Chinese bird cage"). In his case the chrome broke down and he had to give up using the device.

Chrome is an issue with Chinese import devices - some people are intolerant to it, sometimes it comes off leaving jagged edges. However, some suppliers are adamant that their devices are stainless steel. At least one supplier goes to great trouble to tell you how to identify stainless steel:

1,when you receive the product, please use the weapon (such as blades, screwdrivers, nail clippers, etc.) in the product does not affect the use of obscure or where a little hard to draw a mark, shown in Figure 1, if the paint marks, the products appear on the right this brass, to prove the product surface plating...(read more)

Of course this could be BS. However, since very similar devices in stainless steel turn up in European and American sex shops, I'm fairly sure that at least some of these devices aren't  chrome or - God help me - pewter.

Search one portal and you'll see some very recognizable male chastity devices, some in metal, some in silicone. Are they real or fake?

Some must be counterfeits... but there are reports that some counterfeit CB6000's are less prone to splitting than originals. On the other hand, are the splitting CB6000s actually counterfeits as well?

Some probably reuse original molds, like the endless versions of Bon4/Birdlocked. Too bad for the original designer - I've been pirated once, and it made me mad.  Or is the story more complicated?

Some, like the monster above, are at least... inspired by original Western designs.

However, a good many turn out to be what Western sexshops have been quietly repackaging as their own; when the lights go on and we can see where things are really made, the "Errant Knight's Night Cage"  from www.XXXbigmanuniquechastityworkshop.co.uk (made up site name at time of writing) turns out to be something like "Gimp Fetish Male Chastity Device Number 27" from a factory somewhere near Shanghai.

It's a bit complicated...

What qualifies as real and fake anyway?

In the case of Chinese chastity devices, "fake" and "real" turn out to be relative terms.

Ignore the issue of patents and copyrights, and it's down to design and quality. It's real if the design is relatively secure and comfortable, and the quality acceptable.

Some market leaders in the Western fetish world actually consistently fail this standard!

As for chastity devices from our Chinese friends, it's down to manufacturers, batches and ultimately the quality control of the individual shop - buyer beware!

There may be something to be said for sticking to more local middlemen in the hope that the markup represents quality control - one UK couple have a nice review of what looks like a device of Chinese origin (but for all I know could have come out of a workshop in Birmingham, England).


The future is chaste

Whatever the quality, the fact that Chinese factories are churning out male chastity devices is a good omen (but goodness knows what they think of us!).

It means there's a large enough market to support competition - perhaps driven by a nascent gay subculture of "locked bois". This competition should lead to some very effective CBs. It also means - since ultimately they want our money- that we can expect the Chinese to be shipping some high quality low cost cages and belts within the next few years.

Me. I'm tempted. I'd rather buy a Mature Metal device. But since I don't have the budget... I'll let you know how it goes...