I just had an interesting discussion over on Reddit that hinged on the distinction between "Topping" and "Dominating".

Rather than bringing her partner to the peak of ecstasy through her pelvic muscles and oral technique, the Top renders him a quivering wreck or pleading cum-monkey, depending on her objectives. Just as in love-making, the reactions of the partner - the "Bottom" - shape the actions of the Top. This often-negotiated experience is interactive, a conversation in pain and groans, and is known as a Scene.

They're just a way of mapping the moods of your partner. This is not a manipulative technique so much as a systematic reality check, something male subs seem to need:

There's nothing magical about this. People - your partner included - have four possible ways of relating with other people and their environment:

Well and good, but think about how her energy levels dictate her PIRI Mode. Everybody is different, and each person has their own prohibitions and injunctions - which is why you need to read my book! - but two typical personality types are are "introvert" and "extrovert". 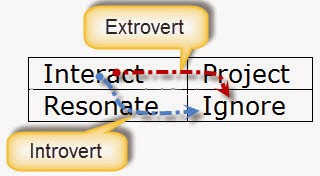 Now we can see the problem with Topping!

For both Introvert and Extrovert, the interactivity of true Topping is tiring. She has to really want to do it before it's worth the effort.

Energy wise, it's much easier to - respectively - slip into being worshiped or making the sub suffer in the manner of her choosing, and even easier for both to switch off and enjoy being served in Ignore Mode.