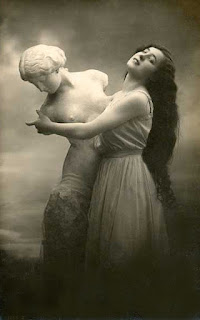 In other words, the Female Led Relationship has to be sustainable 24/7 practically, morally and emotionally. So, when a typical life-style sub looks at his partner, he sees somebody who basically cares about him.

It's still authentic - she's still in charge doing as she pleases in a space where her vanilla tastes and your fantasies intersect. However, it only has to be sustainable for a few hours or days at a time. This means there's no need for her to square the moral circle. She can do all the nurturing and caring whens he's being a wife or girlfriend. Right now, beyond physical safety, she is under no obligation to give a damn about your experience; slavery is an evil institution, and when she's enjoying it she's being evil or at least amoral.

Actually, yes. The trick would be to establish a distinct mood or mode to distinguish the dark parts from the day-to-day female led relationship.