How to negotiate D and S without topping from the bottom 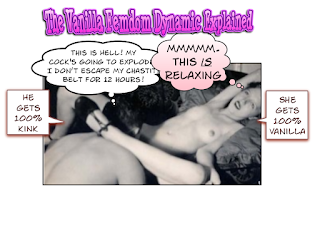 When I'm a slave, it’s real. I can't think outside that role. The chastity belt is a fixture, my owner's word is law, and her pleasure inevitable.

It's a very sustainable approach. She gets to suit herself, meaning she always knows what to do and it's always worth the small mental effort of switching roles.

Being a real slave means that the word "negotiation" is not in my lexicon, not part of my. Literally unthinkable.

Even so, I get the kind of slavery I enjoy.

How? It's all about not giving it away for free.


Can the slave-owner roles really be real?

Philosophically, I'd argue "yes", since even historical slaves had their hard limits – after which they'd rebel or abscond – and real owners were constrained by laws or at least practicalities; a slave is valuable property. So the difference is one of degree.

However, it's not philosophy that gets us hot, hard or wet!

What matters is that emotionally and practically, the slavery is real. Parts of the brain simply can't tell the difference between role play and role, and role and wider self. We easily lose perspective.

Take the Stanford Experiment where students were divided into prisoners and guards, and quickly slipped into abusive relationships. Or take the way people behave differently depending on whether they are in the office, or the car, in the bar, or in bed.

But the collar is the point.


The value of a real slave

If your slavery is real, then it must hold some value for your "owner". This value will be exactly as vanilla or as kinky as they are.

Assuming your partner - like mine – is mostly vanilla, then the value of a slave is measured in service without the need to reciprocate; one-sided pampering, foot rubs, oral sex etc.

These are things your partner couldn't, or shouldn't get through a normal relationship. If, e.g. they want to roll over and sleep after oral sex leaving your frustrated, they need a slave, not a lover or spouse.

The same goes for historical slaves. Men and women purchased them for a reason.


Don't give it away for free

For people like us, it's tempting to give away our submission for free without enjoying the slavery that goes with it. After all, submission is submission and we like doing that. Call this "stealth submission".

However, if you are supposed to have a modern equal relationship, this stealth submission doesn't strike me as very healthy for either of you. You're training your partner into a way of thinking they don't subscribe to—old fashioned chauvinism if he's male—and at the same time relinquishing some of your adulthood. It's better to have a firewall around the D&S area of your relationship.

More importantly, stealth submission means that you're missing out on the rest of your kink, and denying your partner a guilt-free chance to extend their existing vanilla tastes.

So, it's probably better and more fun if you make your slavery strictly part-time, and get a fair price in return for the real value your slavery brings to your partner.


Not without a collar first...

What's a fair price for your slave? In a word, "slavery". A collar, a chastity belt... anything that acknowledges the slave-owner relationship and makes it real for both of you.


How to turn stealth submission into real submission

I've written a whole book on how to get your vanilla partner to dominate you and how to get some of those extras your crave. However, here are some pointers...

Instead, when you're doing something obviously one-sided in bed, share what's in your mind.

For example; "Giving you head turns me on because I'm pretending I'm your slave."

Then, depending on their reaction, float the idea. Don't make a big thing of it, and don't be apologetic either. All you’re asking for is a spice. "Next time I'm going to wear a slave collar."

Then follow through and actually produce—in this example—the collar.

From then on, refuse to perform the submissive act without that collar. At the same time offer your slave whenever appropriate, and make it clear that the slave is available on demand.

Yes, it is—technically—negotiation. However, it's not about demanding particular scenes or actions. It's about bringing what's already there to the surface where you can both see it, and about making a distinction between your everyday self and your slave self.

It's not unreasonable to say "I will happily be your slave if you will treat me as one."


It's also—possibly—permission for your partner 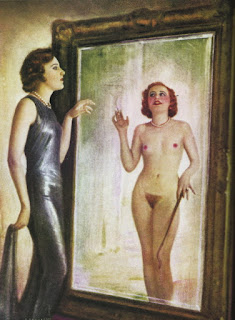 We subs forget that taking the dominant role requires playing at being evil. This is especially true for service-orientated. (If the dominant partner is mostly topping, then they are fairly obviously giving pleasure to their sub.)

This means that very vanilla people with dominant leanings will rarely admit how much kinky pleasure they get from your submission.

Who knows? Perhaps when you're giving your partner oral service, he or she is privately imagining you are wearing a steel collar and can shortly be dismissed back to your cage. There's only one way to find out...

Email ThisBlogThis!Share to TwitterShare to FacebookShare to Pinterest
Labels: Getting your wife or girlfriend to dominate you, Mistakes subs make with Vanilla partners, topping from the bottom