What pushes my wife's buttons about male chastity...

I'm kneeling at the foot of the bed, naked except for my chastity device and nipple clamps.

It's neither a negotiated scene nor optimum for me - she has the covers drawn up so there's nothing for me to see.

There's no safeword or traffic light colours. I have no control over the action whatsoever.

All I can do is kneel there horribly horribly turned on, aware that I won't be allowed to remove my Custom Chastity Saint for weeks, and only then for quick breaks, not for any kind of orgasm, not until I've lost another 2.1 kg.

She looks up over the mound of her knees under the covers. "Having trouble, slave?"

She knows "slave" sets me off. Knowing she knows makes it even more powerful.

My captive cock strains against its cage and I gasp, "Tell me you prefer me this way, mistress!"

"I prefer you that way, slave. All locked up."

My hips twitch and I groan again.

And suddenly it clicks.

Tomorrow morning, Xena will head off for a few days for work. Just before lights out, I insisted she take responsibility for the key. (Call it topping from the bottom if you like. However, from where I'm standing... kneeling... it's more a case of me not giving it away for free. If she wants a slave - she emphatically does - then she has to actually manage him.)


Xena opted for the ksafe. She wasn't really interested in the process but she pressed the button and I got my moment of fear as the lugs whirred into their slots and I was irrevocably locked up for three days.

Xena has worked late to polish off a report, so lights out arrives with no kinky pyrotechnics. However... in the dark, she suddenly becomes frisky - prodding my balls with her feet and getting me turned on while I whimper.

"Better not have a wet dream," she purs. "That'll be another two weeks." More prodding.

More groaning from me.

Back when we were dating, she was very sexually... aggressive? Adventurous? Wild?

The snag was that, even back then, I didn't have many inhibitions. So our baseline vanilla sexual styles were ultimately incompatible.

That left vanilla and kinky teasing styles: stringing out my orgasm, making me work for it. That amused her for a while. However, for her, deep down, tuning into me and playing me artfully always felt irritatingly like service, and she's very dominant.

I'm not complaining, I like being used. (To be honest, if I weren't married I would be fine in that kind of part-time relationship with somebody where there was no emotional bond whatsoever.) 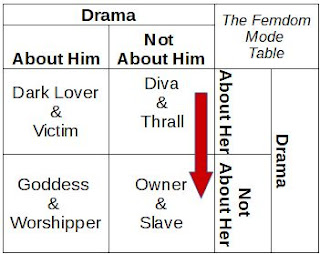 The red arrow indicates her diminishing energy levels. It's never about me, and only ever about her when she's feeling energised. My reactions are important as proof of her power. She's neither playing me nor really engaging with my feelings.

The beatings are never something I can duck out of. She's made it quite clear that safe words are for actual safety only. She can hurt me as much as she likes, even if it leaves me weeping.

It sounds as brutal as hell - it is, deliciously so. However, turn it on its head and see it from her point of view.

Any sense that her power is provisional, that I can turn the tables and pull the rug out from under her leaving her looking silly, is a passion killer. She'd end up second guessing herself, trying to judge things right so I didn't pull the plug.

I did try to reflect this with our original FLR chastity system: her orgasms put back mine by days or even weeks. This stopped working after a couple of years. The mistake was that it made her orgasms about me rather than a celebration of her power. Essentially I was trying to nudge her into the wrong column.

I suggested something different at the start of this year: we agreed she would try a month of her having the arbitrary power to tell me to unlock on a Monday (i.e. to get off) and that otherwise I would stay chaste. She simply denied me an orgasm for four weeks.

It's never about how long I've been locked, or the act of locking. That's all about making a fuss over me and my emotions.

I had thought it was about how long I will be locked, but really that was just her need to set sensible limits so her conscience didn't kick in. The more practical the chastity device, the longer I've shown  I can cope with chastity, the more casual she is about leaving me locked in it.

So my wife has three kinky passion killers and two matching kinky dis-inhibitors:
What am I going to do about this? (Because it's my job to come up with ways to make the Female Led Relationship work for both of us.)

I'll certainly continue to treat the rules and the power as real! Also, the Saint 2.0 I'm expecting to get to field test later in the year will be even more practical than the one I am currently locked into. I have a horrible sexy feeling that that will take the brakes off her dominance.

That leaves how to deal with lockup.


So we should definitely use the ksafe more, and set it for much longer time periods. Or try sealing the device in some semi permanent way. And I should not expect too much drama around the actual locking.

However, it does seem to be a good thing to call attention to how much time ahead I have to endure.

This leads me to an interesting idea.

Suppose I set the ksafe for two weeks, locked the key in, then took the batteries out?

Each night when I present her with my demerit counter, I could also offer a little plastic wallet with the batteries in it. She has the option to tell me install them so I can be freed in two weeks. If she doesn't feel like making a decision, I stay locked by default. However, she's also reminded that I'm locked for at least those two weeks...