Making his chastity fantasy work for you - PART 1: WTF?

OK, so he wants you to "force" (ha ha) him to wear a chastity device, and probably to tease and deny him. 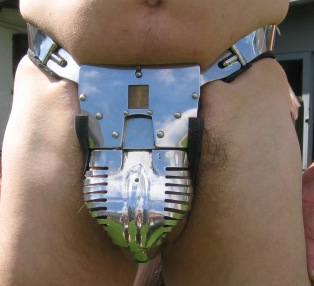 Male chastity fantasies and fetishes - sorry, they're just weird; and I should know, I have one. When in kink mode, I am happiest when locked into a chastity belt for the duration of the action, and overnight if possible.

However, most women - most people - are not service tops, or can't keep it up for more than an evening, and I bet he wants this for several evenings in a row, and possibly in between. It's starting to look less like a kinky game and more like a lot of hard work for you.

Before we go any further, remember, you have a right to say no, to tell him to put the stupid toy away except for the odd session when you are feeling generous.

However, if you are at least willing to consider the idea, because you love him, or because it might be an adventure, or because you're feeling generous, then this series of blog posts may help.

I'm not going to waste time on understanding his fantasy. It's enough to know that it probably...
All very interesting, perhaps, but not very useful.

Moresover, Male Chastity is designed keep him sexually aroused an awful lot of the time. The idea is for him to wallow in a bath of eroticism... to return to the experience of teenage. Unless you are using some other device, you're just not going to feel that way all the time. But then men think about sex more than women anyway, so let's just not go there.

Instead, I'm going to work through the several kinds of male chastity and show you how to make them worth the trouble.

As always, the motto is:


Male chastity should offer you something you couldn't or shouldn't get through a normal relationship.