Making his chastity fantasy work for you - PART 2: The three flavours of male chastity 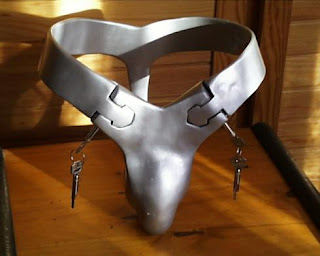 Unfortunately, the Internet tends to give the impression that there's only one kind of male chastity:


She has the keys and teases him mercilessly while using her power to get him to do the housework. If he's luck he might get to come once a month...


Nothing wrong with that, but people are more complex, and a male chastity device is a far more subtle toy or tool than people seem to think.

If you talk to people, read what they say online, then there are three broad flavours of chastity fantasy (apart from the first, the terms are my own)


The CHASTIZED wants out of the belt so he can orgasm ASAP. However, you have the keys and can use them as leverage to get almost anything you want - the kinkier the better, as far as he's concerned. He enjoys being on the wrong end of this kind of power.

The CHAYSTE male doesn't really want out of the belt once he's in. He enjoys the continuous arrousal and hightened awareness, and the sense of permission he gets from not having his penis in play. He'd also like to think that he's doing this as an act of deep submission. Keys? What keys.
(I suspect more chastity obsessed males are chayste than they let on, and that this flavour underlies the other two. However, it;s unfare to point this out to anybody.)

These three flavours of chastity all involve the same thing; some sort of chastity device. However, they work quite differently. For example, release is only an incentive for the Chastized. It would be a real let down for the Chathalete when he's two days short of his target, or the Chayste when he's wallowing in desire.