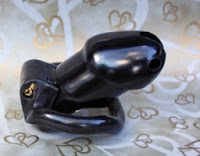 Over on Locked Men, "ManagedMan" found his Holy Trainer 2 had become loose. He cleverly used a heat reset to fix it:


I removed my HT2 for cleaning and drew a sink full of hot water from the tap. I put the disassembled HT2 bio-resin pieces into it and left it there as I showered. After I got done 10-minutes later, I removed the pieces from the now luke-warm water, drained the sink, cooled the pieces with tap water and dried them off.
Low and behold, when I put the tube into the ring lock mount, it was tight again! It was almost too tight, just like when I first got the HT2. (Source)

Meanwhile, "gayboykink" on tumblr has a broken Holy Trainer 2 ring, his second breakage - he had a tube split (link). It'll be interesting to see how their customer service is. I had no problem getting them to replace 3 breakages in a row. The replacement they sent me has is fine after 18 or so months, so perhaps "gayboykink" was just unlucky?

Back in 2015, "rch1ng" reported a problem with seams. "Lockedwithlove" had a similar problem and recommended using sanding paper, something I've also done. Several users on that thread said that they'd had no problem. Somebody suggested that the problem devices might be fakes - however mine came direct from the manufacturer.

All that said, most reviews of the Holy Trainer 2 are overwhelmingly positive (for example)! Also, issues are no worse than the much more market CB6000 which splits from time-to-time (example) - though, as with the Holy Trainer 2, people usually report a free replacement.

I think that the device is fine for what it is and what it costs; an off-the-shelf specialist device for a specialist fetish that is still relatively cheap compared to, say, acrylic jewellery which has to withstand far fewer stresses and strains. Given the volumes involved, there are bound to be quality control issues.

What really matters is that you get a working device in the end. To date the Holy Trainer people seem to have a good record for replacing broken models.